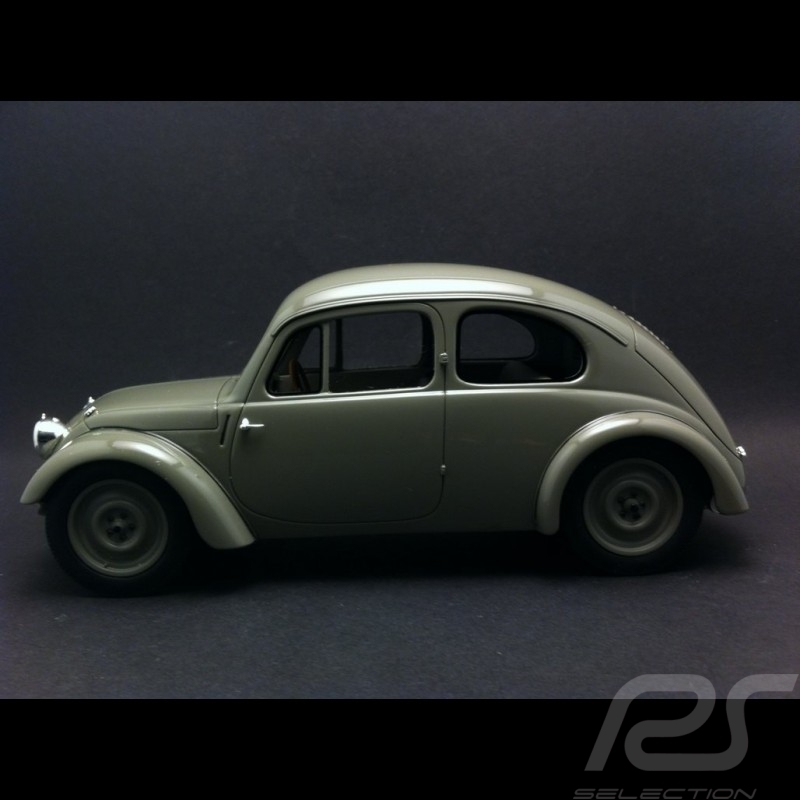 Ferdinand Porsche, in the course of his career, had constructed no less than seven compact and small cars for various manufacturers. As the ultimate result of these projects in terms of technology and design he finally developed the Volkswagen concept in 1933, presenting the car to the Reich Ministry of Transport on January 17, 1934 in his “Study for the Production of a Germany People’s Car” (quite simply, the “Volkswagen”).

At the end of the day the political leaders back then were also convinced of the concept Porsche and his constructors had developed. So five months after submitting the study, Dr. Ing. h.c. F. Porsche GmbH received the order to develop the car at the initiative of the Reich Government. And while the original agreement was to build only one prototype of the Volkswagen, the RDA increased the order on 7 December 1934 to three cars assembled in the garage of Ferdinand Porsche’s private residence.

The first Volkswagen prototype, the V1 (V = Versuchswagen or Test Car), was ready to go almost exactly a year after the official development brief, Ferdinand Porsche presenting the saloon to an RDA Technical Commission on July 3, 1935. The second test car, a convertible code-named the V2, set out on its maiden trip on December 22, 1935.

After construction of three further Volkswagen prototypes code-named V3 had started in February 1936, resistance to the project began to build up in the RDA. Quite simply because, with its central tube frame, the torsion bar suspension invented by Porsche and the air-cooled four-cylinder boxer engine at the rear, the Volkswagen was now seen – and feared – as a serious competitor to existing models. A further series of 30 prototypes (VW30) was nevertheless built in 1937 by the then Daimler-Benz AG and tested in a large-scale trial covering a total of 2.4 million test kilometres.

Contrary to the first idea to build the Volkswagen in a joint venture of German car makers, the Reich Government decided on July 4, 1936 to build a separate plant for the new car, the Volkswagenwerk. So the “Gesellschaft zur Vorbereitung des Deutschen Volkswagens mbH” or “Gezuvor” for short (the “Company for Preparation of Deutsche Volkswagen Ltd”) was established on May 28, 1937.

As one of the three managing directors of Gezuvor, Ferdinand Porsche received the official order for the technical development and planning of the future production plant, with construction work starting in May 1938 in the small town of Fallersleben, now Wolfsburg. History of automotive industry had change !