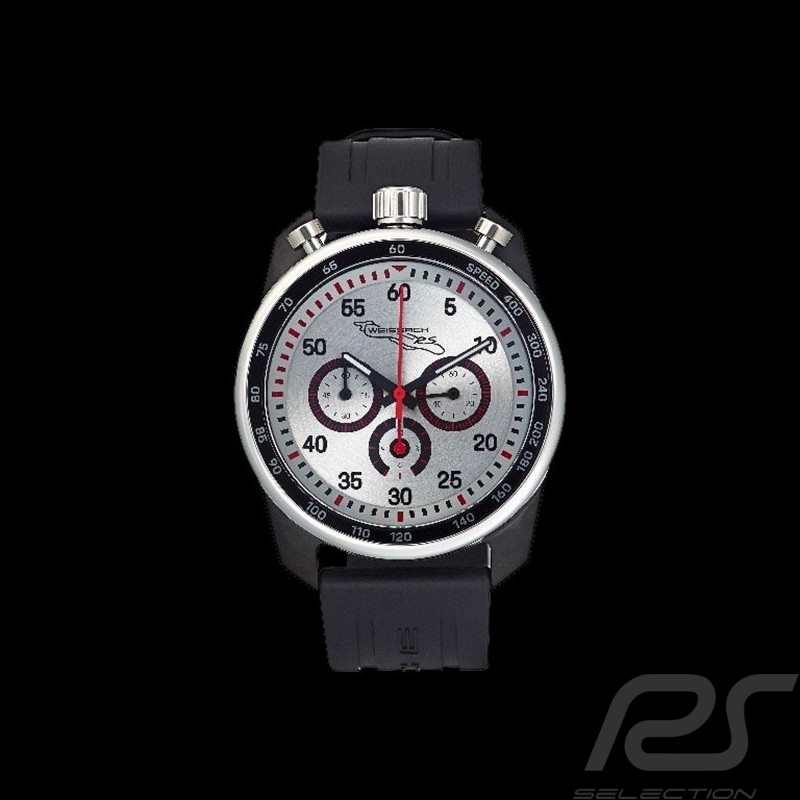 Screw-down crown and pushbutton at 12 o'clock

Screw-down crown and pushbutton at 12 o'clock

Waterproof up to 10 ATM

Porsche RS DNA on your wrist

At a time when the Porsche research and development center in Weissach is celebrating its fiftieth anniversary, Porsche is presenting a watch that illustrates its constant quest for sporting performance.

The construction of Porsche's research and development center began in Weissach in 1961 and spanned several decades, in order to remain constantly at the forefront of technology. Weissach is the nerve center of Porsche. From the first sketches to the final prototype, all Porsches are developed, tested and prepared for series production from Weissach.

The center covers all aspects of automotive design and design: modelmaking and prototypes, aerodynamic, acoustic and electronic tests, chassis and suspension development, running gear, steering, safety testing and analysis. It includes a modular circuit, used in particular for the development of competition models, and a track for off-road testing. From the center of Weissach come the best performing 911s, from the 1969 911 R to the current GT2 and GT3 RS, as well as the models that forged Porsche's competition record - Porsche 917, 956, 962, 959, 919 on your mind.

From the early 1970s the Porsche center was renowned for its excellence, and over time many manufacturers called on its services: VW, Seat, Opel, Mercedes, Harley Davidson and even the German army, to name a few. This is also where the Porsche Motorsport department is located, and so the Weissach signature on a Porsche model is the guarantee of exceptional performance and truly sporty and extraordinary sensations.

The new chronograph from Porsche does not only evoke the chronometers used during the greatest hours of motor racing: it proudly and unambiguously bears the authentic Weissach RS signature.