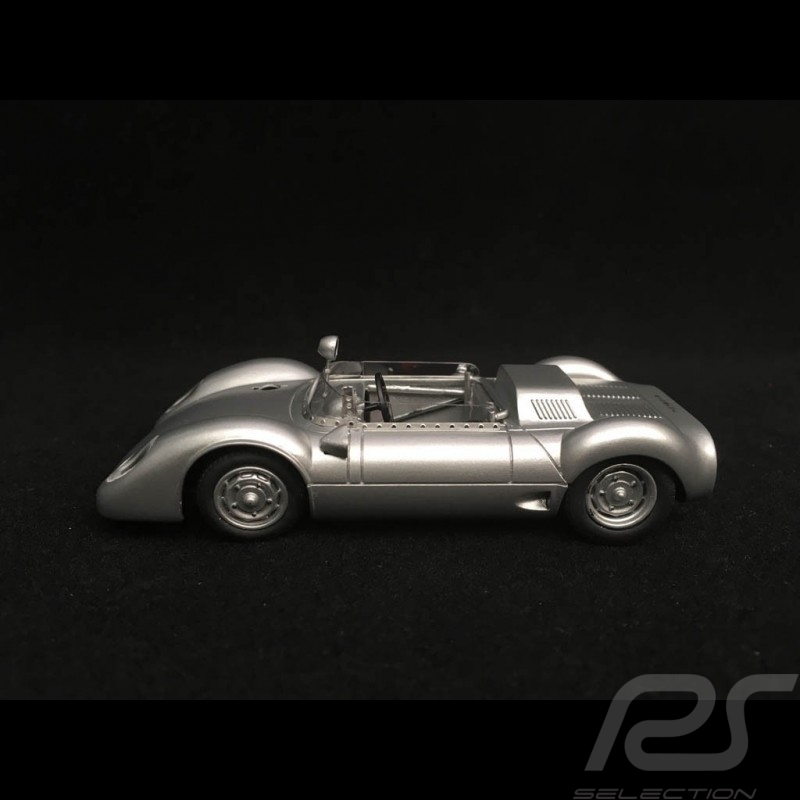 In the early 1950s, inspired by the success of Porsche-based Glockler models, Porsche undertook to build the company's first racing car. Ernst Fuhrmann was responsible for designing a competition engine (project 547) and Wilhelm Hild led the development of a new chassis (project 550).

In 1954, Porsche announced the production of the 550 RS Spyder, a racing car for private drivers. On the track, no one in the same class could compete any more and even the upper classes were not safe. By the end of the year, production cars, now available, allow many private drivers to turn into race winners.

Despite (where?) the tragic episode, in the story of 550 Spyder, of the fatal accident of James Dean in 1955, the car quickly reached a legendary status of racing.

Created in 1959 by Durlite American aerodynamicists from a Porsche 550 destroyed the previous year, this unique copy with the front simplified gave the Spyder a 10-year lead over his contemporaries.

The owner Bob Webb was obsessed with the airflow, so he ordered Durlite a body with truncated back that not only gave a much more extreme look to the 550 Spyder but produced much less pressure in the front .

Bob Webb was a SCCA (Sports Car Club of America) racer, but crashed the Porsche on his first outing. He had previously ordered Durlite a sports coupe with a standard 1500 Porsche engine, so he had a fair idea of ​​what he wanted when he started rebuilding his 550 Spyder.

Rather than buying new parts to restore the Porsche to its original format, he obtained permission from the company to take the experimental route, using as many components as possible from the original car and making the rest. He even installed an RSK 1600 engine. But it is the bodywork that bears the mark of aesthetic and aerodynamic transformation. Porsche himself only approached this shape in corner with the 908/3 of 1971!

The Durlite Spyder is ahead of the technology of the 906 by six years, and even prefigures the Ferrari 250P prototype of 1963. As the design of racing cars evolved in the 1960s, innovators like Chaparral and Lotus began to take Very seriously aerodynamics, in order to exploit the force of the air. By the end of the decade, the corner shape of the Durlite had become almost universal.

Much more recently Audi, curious to make comparisons with the evolution of aerodynamics and drag coefficients tested the 50-year-old car in its tunnel. Audi engineers were amazed to find that the nose did not rise before the theoretical speed of 308 km/h!